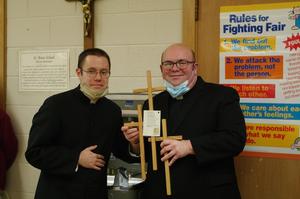 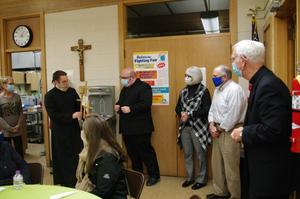 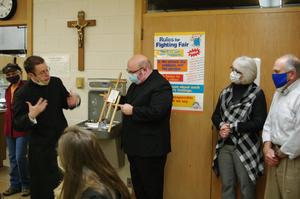 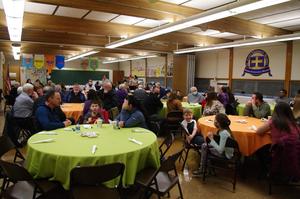 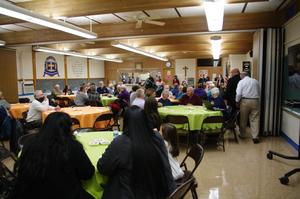 And Pictures from Our Welcome Home Dinner!

St. Anne Parish is ‘Home for the Holidays’

DIXON—Father Timothy Draper calls the timing of a near-disaster at his parish “providential.”

On the First Sunday of Lent, Feb. 21, early morning Mass was proceeding as usual at St. Anne Church when a loud CRACK, “like a gunshot” startled everyone just as the prayers of the faithful were commencing. A parishioner who used to work for the local fire department looked up and yelled, “Everyone out – NOW!” People scattered.

If the “very visible” crack had happened in the middle of the night, Father Draper says, “we could have woken up to a collapsed roof.”

By the time he had walked around the outside of the church to reach those gathered in the narthex, his firefighter parishioner had already called an area construction company. Bob Slain, a parishioner at Dixon’s other Catholic parish — St. Patrick — “brought a group over right away,” Father Draper says, and they soon shored up the beam with a wooden support column. Speed was important — the men noted that the cracked beam “continued to talk to us” as they worked to stabilize it.

During an inspection for insurance purposes some days later, a second beam, over the sanctuary, was discovered to also be cracking. Again Slain Construction soon had it stabilized and supported. Even so, the church could not safely be used, and St. Anne School, attached to the church and sharing a wall with it, was closed out of caution.

Nine months later, after the “highly-specialized repair work” was completed by a qualified engineer and contractors, the parish celebrated their return “home” on Nov. 20 with Mass and a dinner.

The event also served as a thank you to several people.

Father Keith Romke was pastor at St. Patrick Church when the beam succumbed to the effects of the severe winter, and he called Father Draper that day to offer whatever he could to help.

“I met with him on Monday and discussed a schedule for our parishioners to use St. Patrick’s for our Masses and sacraments,” Father Draper says, adding that current St. Patrick pastor, Father John Evans, was “just as gracious as Father Romke” with his help. Both parish staffs came together beginning that first week to work out the many logistics.

“By the weekend of Feb. 27-28, we were having Masses at St. Patrick’s,” Father Draper says, with St. Anne Masses fitting in between St. Patrick’s Masses. St. Patrick Church, he adds, “on Sunday mornings was a hopping place!”

Weekday Mass times were worked out, and St. Anne’s also held its March 1 confirmation, its April 24 First Communion, its funerals, baptisms, and such at St. Patrick’s.

Logistics for St. Anne School were more challenging, but after a couple of weeks of remote learning the preschool was settled in at My Play Village in town, grades K-4 soon were meeting in the St. Patrick Holloway Center, and grades 5-8 quickly followed in person at classrooms at Sauk Valley Community College. Father Draper regularly provided Masses for the grade school students in both locations and stopped by each week to say hello to the preschoolers. Students were bused to and from Holloway Center to provide a single drop-off and pick-up point.

For the first three months of school this year, all students were together again in rented rooms at First United Methodist Church. They’ll be attending St. Anne School again the Monday following Thanksgiving after a short period of remote learning as school supplies are moved in.

Parishioner volunteers were a great help throughout the process, Father Draper says. Before the beams were repaired, parishioners removed the pews and did the prep work to have the ceiling repainted. They stripped and cleaned the church floor and put new coats of wax down. They cleaned the stained-glass windows and window sills, all of which “added brightness and made it all clean and fresh,” Father Draper says.

Repairs were made to the pews, the church vacuumed and the carpet cleaned, and after the repairs were made, everything — pews, altar, ambo, tabernacle — was moved back in, again by volunteers.

“The final touches were done Nov. 13, the first day we had Mass back in our church,” Father Draper says.

The Nov. 20 dinner provided “a chance for us, with Thanksgiving just around the corner, to publicly thank Father Evans and his parish staff for their kindness and hospitality to us for the past nine months,” Father Draper says.

“I’m very proud of my parishioners. Very proud of our parish and school staff and our school community for hanging in there together. And now we’re able to praise God and to celebrate together as well.

“We’ll be home for the holidays.”